The town of Cheltenham is well known for its links to the past. As a spa town many people would have been drawn to the area for the cleansing and healing properties of the spring water. For those local residents who used Estate Agents Cheltenham based to find the perfect property in the area there is a whole wealth of places to visit and enjoy on a regular basis. 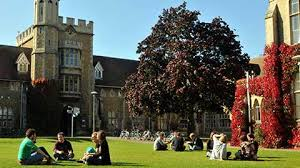 Education has also been a strong part of the town’s heritage and it continues to be to this day with the UNiversity of Gloucester having two of its main campuses in Cheltenham. The university site has a history that dates back to 1847 when a college was originally founded by Reverend Francis Close (who one of the campus sites is now named after). This was located at the now Francis Close Hall site and was called the Cheltenham Training College.

Following on from this the college name changed a number of times from the Cheltenham School of Art, through to College of Education and then finally the Cheltenham and Gloucester College of Higher Education before it officially became a University in 2001. There are three main campuses all catering for different qualification subjects.

The Park Campus – is the largest of the three campuses and dates back to the 19th Century. It was an area originally used as a botanical and zoological garden. Media subjects are taught in this campus with state of the art facilities including a newsroom, editing suites, television and radio studios as well as teaching spaces. There is also student accommodation available at the Park site. In 2009 the Park campus was designated a community green space and there are over 900 trees planted as well as a meadow and shallow lake.

Francis Close Hall – the oldest campus situated near to the town centre. This is where the humanities, education, creative and natural science subjects are taught. It is also where some of the university’s special collections can be viewed including the information relating to previous educational facilities on the site and Gloucestershire poets collection, amongst others. Next to this campus is the Centre for Fashion, Art and Photography.

Oxstalls – this campus is located over in Gloucester and covers sports related subjects as well as floodlit pitches and state of the art sports science equipment and lab facilities. There is student accommodation available at Oxstalls as well as a recently built Growth Hub for local businesses to use.